On February 7th, 2018 my husband & I joined the heart family. I was 23 weeks pregnant with our daughter when we were referred to a heart specialist, after a 2-hour ECHO, he told us that our daughter would be born with Tetralogy of Fallot & Pulmonary Atresia and would require numerous surgeries.

On May 11th, 2018, Kaeli Nichelle was born. She was intubated & taken to the PCICU immediately. When she was 13 days old, she had her first open heart surgery to place a shunt in her heart to buy us some time before her full repair. Surgery went well, until they got her in the elevator. The shunt they placed formed a clot & they immediately needed to perform her 2nd open heart surgery in her room to remove that shunt & place a new one. That day was an emotional roller coaster; she did well one second & the next we were being being prepared to lose her. At the end of the day she was placed on ECMO, a heart/lung bypass machine & was given a low chance of coming off alive. She had seizures while on ECMO & formed a small brain bleed, but miraculously, she came off the machine 4 days later.

Kaeli continued to grow in the hospital, & we were able to trial going home with her, it only lasted 24 hours before her oxygen level dropped & we rushed to our local ER. They got her in an ambulance to the main hospital that had been caring for her.

The surgeons decided that we needed to remain in the hospital until her full repair. This happened on August 14th, 2018, 3 months sooner than anticipated. This time, surgery went better, no complications, except they found out that she had a rare SVC vein issue where her blood went through her heart & to her body incorrectly. We were told that she would need another surgery around age 5 to fix this issue.

Kaeli was discharged at the end of September 2018, but we were constantly in and out of the hospital with different illnesses during the winter season. On February 7th, 2019, Kaeli began having seizures as a result of having been on ECMO early on.

In March, she had surgery for her g-tube, & had an ECHO done to check on her SVC vein issue. The surgeons saw her getting worse & they made a plan to do her 4th open heart surgery 2 weeks later in April. This surgery was more extensive than the rest because it had only been done a handful of times on older kids. Thankfully, Kaeli made it through surgery well and recovered quickly.

We celebrated her 1st birthday in the hospital, but went home a week later and have only been back a couple times with illnesses, and for appointments. She’s spent 200+ days in the hospital and will need more surgeries in the future, but we know that she will keep fighting. 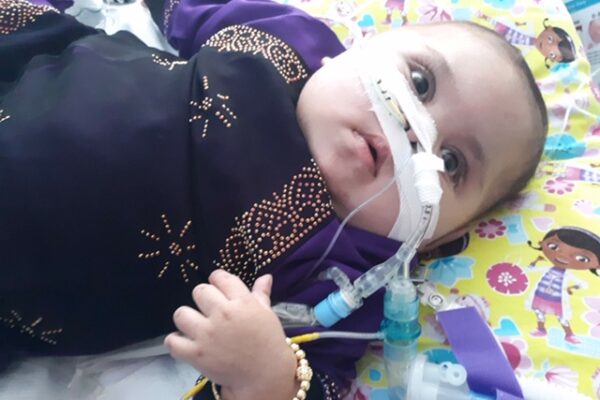