Posted on April 1, 2020 Categories: Featured, Heart Family Story Comments are off for this post 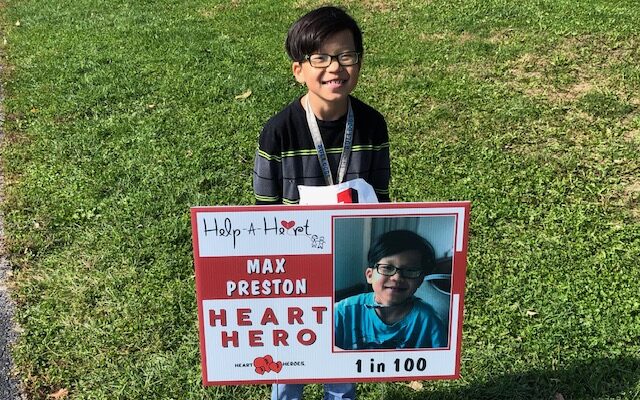 Max is a survivor.  He is truly a medical marvel.  I know all heart heroes are, but Max is a truly special case.  His diagnosis is heterotaxy causing right atrial isomerism, unbalanced complete AVSD with left ventricular dominance and right ventricular hypoplasia, transposition of the great arteries, subpulmonary and pulmonary valve stenosis, twin AV node tachycardia, asplenia, abdominal situs inversus and malrotation of the intestines.  The normal course of treatment for such a diagnosis would be the three-staged procedure of the Norwood, Glenn and the Fontan.

However, Max was born in China and they didn’t do the Norwood on him there.  He didn’t have his Glenn until he was 3.  When we adopted him at age 5, he was very small from his severe lack of oxygen and had clubbed fingers and toes.

We first sought help in Des Moines and found a wonderful cardiologist here.  Because he was so small, he wanted to wait until he reached 40 lbs before doing his Fontan, but his oxygen levels were in the 60’s so it was decided even though he hadn’t reached his 40 lbs it was time to have his Fontan.

Based on his very, very complex anatomy, we elected to have his surgery done in Wisconsin.  They did a full cardiac MRI and the day before the Fontan we were told that they had been going back and forth on whether they could actually do the Fontan because it was so complex.

Finally, they decided they would do it, dubbed a “Super Fontan” and were confident that they had found a way to modify it and make it work, but that it would carry a higher amount of risk.  They told us he would likely be in the hospital for about a month based on the complexity of it.

Because of the miraculous work of his surgeon, he did come out on top and we were actually out of the hospital in about 2 weeks.  Since then, he has had a loop recorder placed to track his arrythmias, malrotation surgery, and an interventional cardiac catheterization to close his fenestration and veno-venous collaterals.

Through it all, he smiles, he laughs, he perseveres.  We are so lucky to have the bravest son in the world.  New medical challenges arise for him every day, but he overcomes it.  He is a true superhero.