Posted on November 2, 2018 Categories: 30 Days of Thanks, Featured No comments yet

During the month of November, Help-A-Heart will be putting the spotlight on various ways people support and donate to our organization throughout the year.  Obviously, attending one of our annual fundraisers–the Celebration of Life Dinner & Silent Auction in June & the Superhero Heart Run in October–are two big ways you can further our cause!  We also receive several cash donations online through our website or mailed to us throughout the year.  However, we are humbled & encouraged by the unique ways some of our heart families & their friends choose to support us & wanted to make sure they know how much we appreciate these special gestures.  We’ll be posting a few ideas a week as a part of our 30 Days of Thanks!

Thank you to Alyssa Grier for the blog post below about Kenna’s Lemonade Stand!  What a fun & unique way to raise money for several great causes close to her heart! 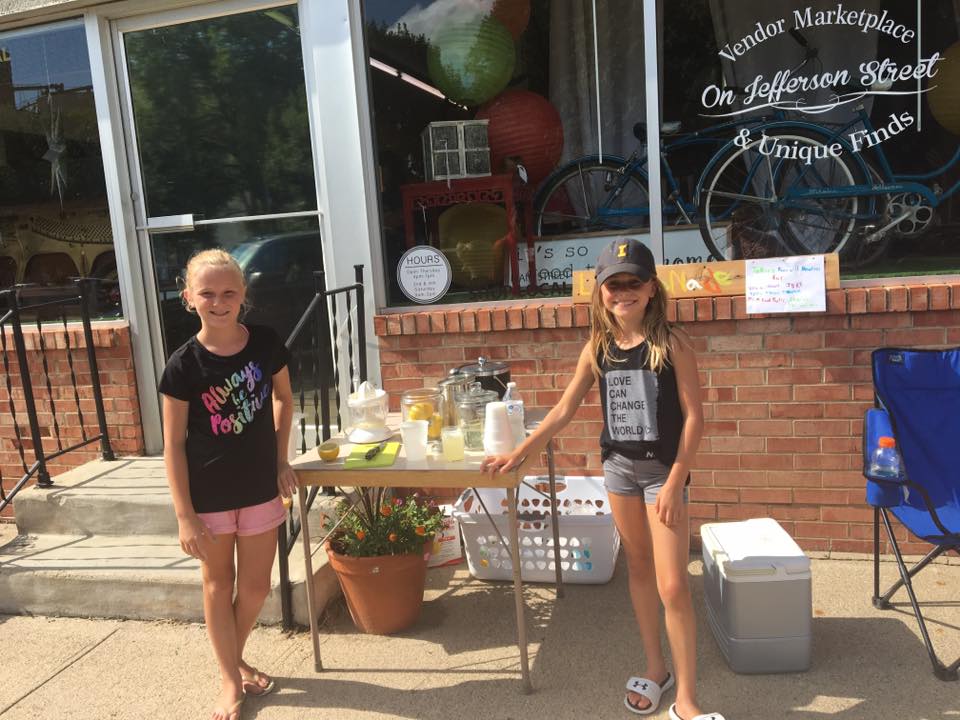 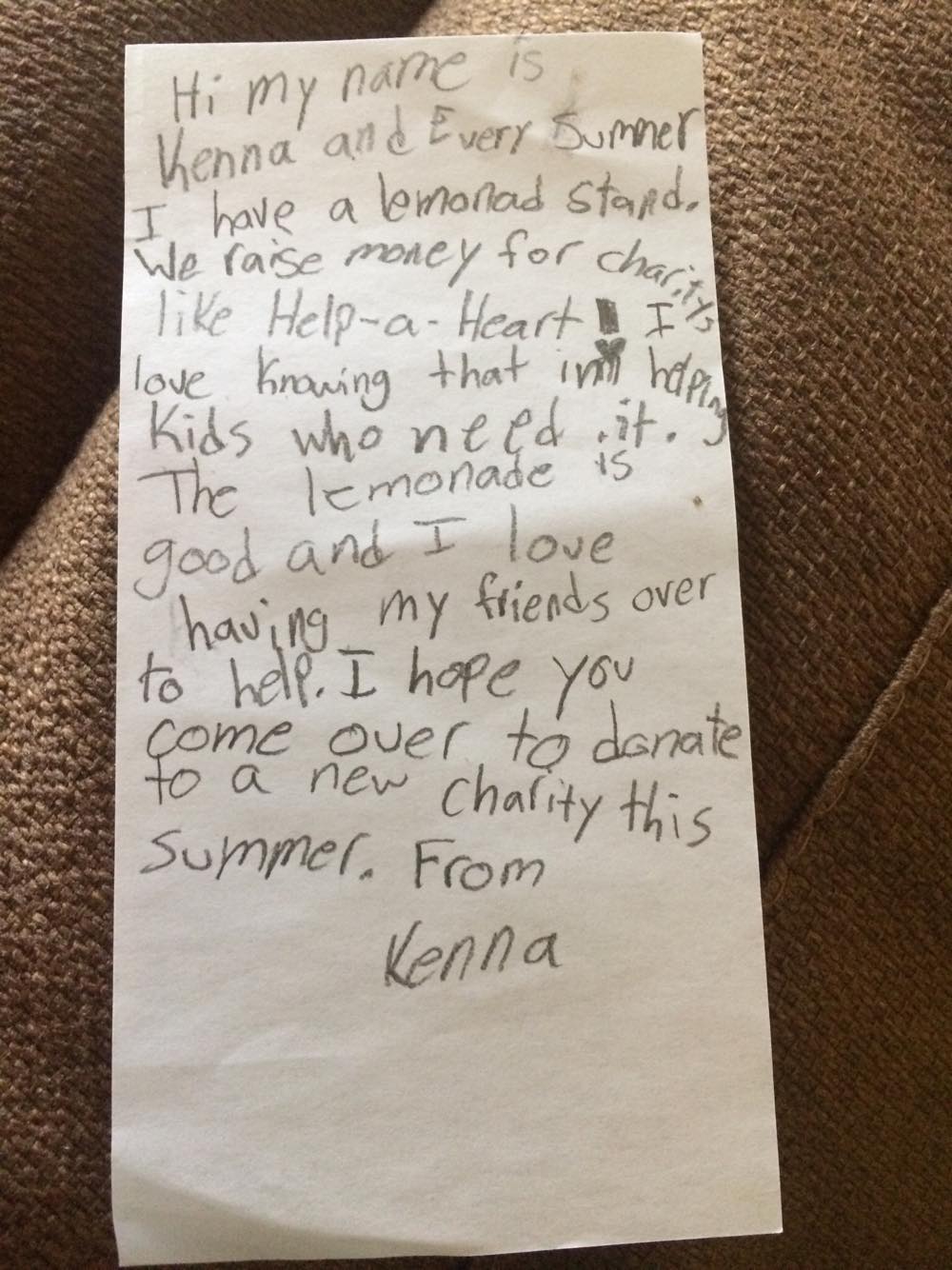 It all started in June of 2014.  Kenna, our then five-year-old daughter, wanted to set up a lemonade stand.  It was a cool night when she tossed out the idea and I suggested to her that it might be a little too chilly and late in the evening to sell lemonade.  She then went into our kitchen, opened the fridge and found another entrepreneurial venture.  This time, string cheese and I couldn’t really say no to that so she spent the next half hour set up just outside our front door yelling “Cheese sticks, five cents! Get your cheese sticks!”  Her two customers that night thought she sold pretty good cheese and made a good salesperson but then again we were pretty biased as her parents.  I posted on Facebook about her cheese venture as a way to remember the moment and was told that if only she would have had a better marketer on her team she would have sold out.  Her grandparents thought they were pretty hungry for some cheese if only they would have known sooner! When July came around and the weather turned warmer, she was determined to make lemonade so her marketing team went to work.  Some posts were made on Facebook to inform and round up customers, and then a recipe was perfected for the lemonade. By chance, we had just found an electric juicer for sale at a garage sale for $2 and decided that it would be fun to make fresh squeezed, hand shaken lemonade for the stand.  She also decided it would be really fun to donate all the money to a good cause and she picked the PCM Food Pantry.  The first stand and all it’s generous customers raised $75.
The summer of 2015 came and having another stand was on the top of Kenna’s summer to-do-list so she set up shop again.  This time she wanted to collect donations for the Cystic Fibrosis Foundation as she had just learned of the disease and wanted to help those with it.  A teammate on her softball team that summer had/has cystic fibrosis and we also had just recently learned of several other children within our community who were fighting for a cure of the same disease. Kenna, along with several other neighborhood kids, squeezed lemons, added sugar, water and ice and collected $250 that year.
Another summer came and Kenna was begging to have another stand.  It quickly became her favorite summer tradition.  In 2016, we had learned more about an organization, Sharing the Weight.  With it having a connection back to Prairie City and our family and friends, she knew right away that it would be a great organization to collect donations for through lemonade sales and, with the help of her great grandpa, she also sold handmade, hand painted birdhouses.  The birdhouses and drinks brought in $330 for Sharing the Weight.
2017 came and Kenna realized it would be her fourth year of having a lemonade stand so she decided she wanted to set a goal to raise $400 and she also wanted the help of her four grandmas to do that.  She asked each grandma if they would help her do some baking. She realized that the extra product of birdhouses the year before made for more money and decided she wanted to sell cookies as well as lemonade. All donations would go to Help-A-Heart in honor of a local boy who has battled a congenital heart defect from birth and had undergone an extensive surgery that year.  Over $400 was raised, cookies were sold out and priceless memories were made with very special grandmas.
And then that brings us to this past summer.  Kenna set her goal high.  $1000.  As her mother and thinking that might be a little ambitious, I suggested possibly following the same rule she had thought of the year prior.  With it being her fifth year, maybe $500 would be a good goal.  She countered with $550 and we started planning a yard sale and shopping for lemons in order to reach that goal.  She wanted to raise money for all the organizations she had donated to over the years…the PCM Food Pantry, the Cystic Fibrosis Foundation, Sharing the Weight and Help-A-Heart.  And since it was her fifth year she thought it would be nice to donate to five organizations.  In the winter of 2018, we had to say good-bye to one of those very special grandmas mentioned above.  She was one of our favorite customers and one of the biggest supporters of Kenna’s Lemonade Stand, often running at the last minute to get more lemons when she’d run out and of course so important and special to us everyday.  In honor of her, Kenna decided the fifth organization would be JDRF.  She also decided to expand the number of days she set up the stand and yard sale because of that and all the amazingly generous customers, she surpassed her $550 goal and made her mother eat her words.  $1000 was raised.  $200 going to each organization.  And it all started with a $2 juicer and some cheese! : )
Thanks for all you do through Help-A-Heart!  We are so happy that Kenna’s Lemonade Stand can help in a little way.