Posted on May 15, 2015 Categories: Featured, Heart Family Story No comments yet 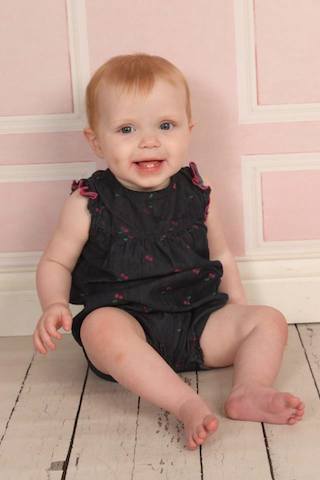 There is a scar that runs down the center of my daughter’s chest. It isn’t ugly, in-fact, it is quite beautiful. A Badge of Honor, inscribed in her chest, with a knife, as Sydnie grows older we will explain to her that the bible says; although the world is evil and passing away, there are three things God gave us: Faith, Hope, and Love. The greatest of these is love.

We were at our 20 week ultrasound appointment, the specialist discovered that the growth of Sydnie’s heart was abnormal. The left side was smaller then the right. It was AVSD (Atrioventicular Septal Defect); same family as HLHS.

Sydnie had a first (Norwood) of a series of heart surgeries, when she was 11 days old. We went home, then returned. Sydnie was having some complications with her oxygen levels. Sydnie, was going into heart failure. She had to do an emergency heart cath to put stints in her aortic arch and pulmonary veins.

We stayed in the hospital for a couple of weeks, thinking that we are going to be there until the 2nd surgery (the Glenn) of the series. Sydnie’s heart wasn’t functioning. There was nothing that the doctors could do. The best option would be to put her on the transplant list. We knew that would be the best thing for Sydnie.

Thursday, October 24, 2013, We received a heart. The donor was on the same floor as Sydnie!

Sydnie’s next problem was getting off the ventilator and to breath on her own. We would put her on trials of breathing on her own, and she would fail every time. It was discovered through the x-rays that her diaphragm was not working. A nerve had been damaged in the delicate operation that paralyzed her phrenetic nerve. Placation of the Diaphragm was decided but only one side to see how she would respond. Back to surgery she came out fine, but time was not on her side. They had to get the breathing tube out of her soon, or damage to the lungs could occur. Unfortunately the placation on her diaphragm did not give us the results we hoped for. Now it was time for a trache. We tried to avoid it, but it had to be done. She had to have her trache be suctioned a lot, and she couldn’t make a sound verbally, her big blue eyes had enough expression you could easily read her emotions. We had to put mittens on her hands so she would not pull the ventilator off her trache. She was expected to go home with a vent and her trache, however it was removed before we left January 12. Her breathing was great!

Sydnie went home with a NG tube in her nose, for feeding, and her medicine. A month later, we decided to put a peg tube in her belly, so she would start eating. Within 2 wks she no longer needed her belly tube. Sydnie has recovered well. Her heart is abnormally “normal.” We are tube free.